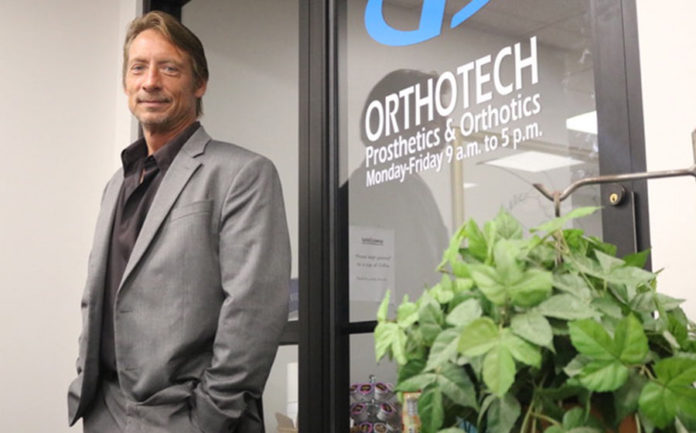 Patrick Davis, 53, of Vassar, never expected to be able to walk his daughter, Kasey, down the aisle last spring, and he certainly didn’t expect to dance at her wedding.

An amputee since 2010, Patrick had spent the last nine years in a wheelchair and on crutches after developing a serious bone infection from many injuries to his left leg. Continuing health problems took away his livelihood as a foundry millwright and constant pain zapped his energy and hope for his future. After developing abscesses in his leg in January 2011, another amputation followed, two inches higher. But those once-in-a-lifetime wedding memories were made possible because of Mike Bugg, a second-generation prosthetist, orthotist and pedorthotist with 35 years of experience and his own company, Orthotech Prosthetics & Orthotics, in five mid-Michigan locations.

Patrick had heard about Mike’s skill and experience with prosthetics in two chance encounters with other amputees he saw who were easily walking without pain, including a double amputee, during one weekend in August 2018. After asking where they got their prosthetic legs, he was told, “Call Mike Bugg at Orthotech.”

Another patient, Angela Church, 58, of Imlay City, was severely injured in a motorcycle accident with her husband, Jay, on Aug. 1, 2016. A young man who jumped out of his car to help at the scene told her, after applying pressure to stop massive bleeding, “You’re going to lose your leg but I’m going to save your life.”

She was in intensive care at a major medical center with a collapsed lung, broken neck and two arm injuries, and lost her right leg above the knee. After 26 months of rehabilitation and dealing with the improper fit of a prosthetic leg, she was told by her doctor to “Call Mike Bugg at Orthotech.” Both Patrick and Angela made that life-changing call to Mike, and within hours and days, rather than weeks or months, had their prosthetic limbs measured and manufactured on-site. Mike saw Patrick within 24 hours of that initial call. By the next day, Mike had casted him for a new prosthetic and he literally walked out of the Orthotech office that same day. Angela had her casting done the day after Christmas. She was fitted for her new leg three weeks later during a very busy holiday season. “Mike was like an angel to me,” she said.

“When I got out of the truck at home, my wife just burst into tears,” said Patrick. “Nothing ever felt so good. I got dressed and told her, ‘I’m going to the grocery store.’ It’s the little things like that. That’s what really matters.”

Orthotech is proud to offer the technology and convenience of fabrication labs that are part of the Orthotech network of offices in Flint, West Branch, Saginaw and Cass City, with its newest location in north Oakland County.

These are only two of the hundreds of patients at Orthotech who have had life-changing experiences with Mike and his skilled, professional and compassionate team. “It doesn’t matter whether you’ve paid a million dollars for your prosthetic or are using a stick in the woods—if you can’t stand on it, it isn’t any good,” said Mike.

Mike admits he learned from the best in the industry and honed his skills in a disciplined atmosphere of hard work and a passion for each of his patients.  For Mike, the proper fit of a prosthetic is all about fitting the socket. “I judge each patient when it comes to a socket. It’s experience. Each person’s amputation is so different, whether I can cast it or mold it, how tight is the fit, etc. It’s truly an art.”

Without a proper fit, an amputee will experience pain, sores and blisters and the prosthesis will feel heavy and cumbersome. For a patient like Patrick, it sent him right into a wheelchair and the hopelessness that can accompany immobility and pain.

Angela’s poor-fitting prosthesis was partly due to the change in size and volume of her leg tissue, a common issue with amputees. At Orthotech, their casting systems include the Symphonie Aqua Casting System to create even pressure around the patient’s residual limb, resulting in a perfect-fitting prosthesis.

In addition to skill and experience, the real difference between Mike and other prosthetists is his encouragement to his patients.

For more information, visit www.orthotechllc.net or find them on Facebook at Orthotech Prosthetics & Orthotics.

10 Tips to Overcome Your Fear of the Gym