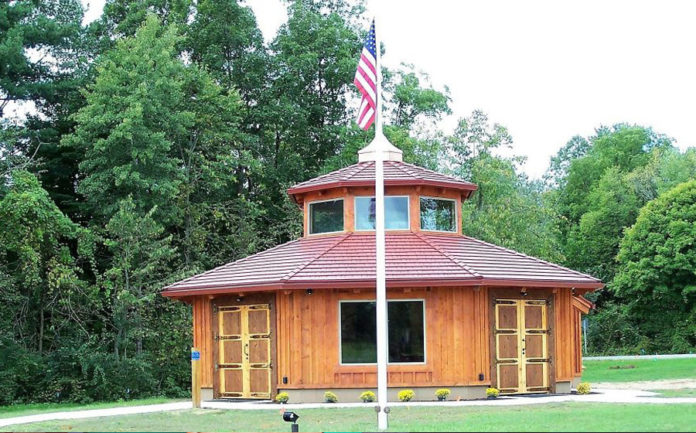 “We wanted to create a place for veterans from across the nation to be remembered.”

Dr. James Stewart is a conscientious guy. He likes to be on time and stay true to the commitments he makes… big and small. He’s a busy man with a lot on his mind. After a career spent as a doctor of optometry with his life dictated by office schedules of patients’ visits, he is now retired. He has a new system to remember important stuff. He sticks a note on his bathroom mirror.

The note on Dr. Stewart’s mirror is a visual poke to his brain about something he doesn’t want to forget. He uses an appointment book so the note-on-the-mirror strategy is more often than not about something woven into the fabric of his life and easily overlooked if he isn’t calculated about remembering it.

One of the commitments woven into his life since he was a young man is his service in the military. He spent a tour with the Air Force on the front line in Vietnam—Sgt. James Stewart, AF Sentry Dog Handler. When he returned to his hometown of Montrose, Mich., after his assignment, he became an active member of his local American Legion post. It’s a thread that has held strong.

Dr. Stewart is quick to explain that the American Legion is a service organization…veterans devoted to mutual helpfulness. It depends on membership, participation and volunteerism to be successful. Its unsung activities and programs throughout the country number in the thousands. It aims to strengthen our nation one community at a time.

The American Legion post in Montrose is on its game. It has taken one member’s simple idea and capitalized on it to create a unique way to contribute to the nation’s collective experience of helpfulness and appreciation. Introducing the Veterans Bell Memorial—a visual celebration of service and sacrifice.

Dr. Stewart acts as chairman of his American Legion committee dedicated to making the Veterans Bell Memorial a reality. He didn’t think of the idea, but he has enthusiastically facilitated the process. Charlie Emmendorfer is the idea guy. He envisioned the Bell as a molecular, concrete (actually metal) testament to the existence of those who were so vital to us at one time but are now gone… visually “ringing,” reminding us of the ones who have sacrificed to protect our rights, free speech, and the pursuit of life, liberty and happiness.

Charlie’s story is one of love for his father-in-law. It wasn’t so much that he didn’t want his father-in-law to be forgotten as it was that he wanted him to be remembered. Charlie pictured a place to reflect and be mindful of our debt to those who have made our way of life and freedoms possible. He envisioned a memorial to real people who experienced real danger, real risks, real weapons, real enemies… not just avatars in a video game. What started out as a tribute by Charlie to honor his father-in-law, Richard Velat, a P.O.W. during the Korean War, became the six-foot tall stainless steel bell. Dr. Stewart quoted a friend’s sentiment: “I’m not famous but this is one place where someone in my family can come and see what I’ve done.” We all want to feel that our lives have meaning. Veterans, by definition, have that distinction secured.

The Montrose American Legion wants to get out the word! The Veterans Bell Memorial was opened on September 23, 2016. Its vision is inclusive and broad. It has been designed to give veterans’ loved ones from anywhere and everywhere in the country a place to come and remember.

The planning committee purposefully chose to locate the memorial in a spot that’s not only beautiful but easy to get to… Montrose Township Park. Six miles west of I-75, the Veterans Bell Memorial is housed in a handsome wood building constructed of 200 locally hewn ash trees. Community members contributed to the expense and labor of construction and continue to support maintenance and management costs.

All gave some, some gave all.

If you would like more information, have a veteran that you would like to honor as part of the memorial, or would like to donate to the ongoing maintenance and upkeep, contact Dr. James Stewart at jstewart@centurytel.net or visit www. vetsbell.org.

Growth Gifts: When Every Relationship Has a Problem