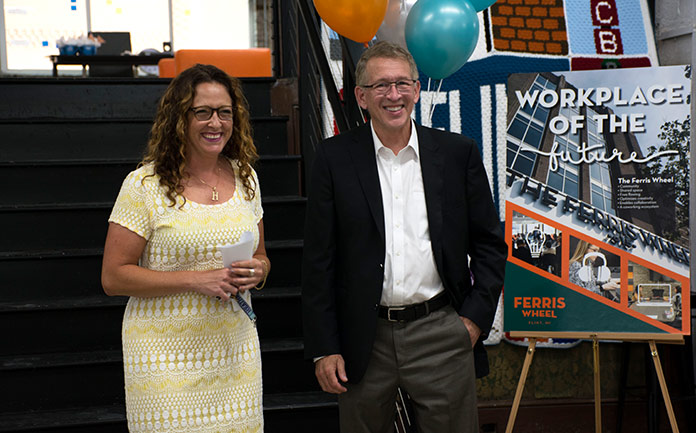 It’s a snowy afternoon when I head down to the Ferris Wheel building for a reception welcoming the city’s first Director of Placemaking Kady Yellow, a newly created DDA position with the task to increase the number and types of activities to take place in Downtown Flint.

The crowd is decent with some notable community faces. As I make my back to the refreshment area, I spot the person making sure the partygoers are having as good a time as possible. “This is the community’s space, so I want everyone who comes in here to feel like this could be their living room,” says General Manager Heather Kale, as she arranges little centerpieces for each table while simultaneously serving beverages. “The point is to make it inviting, to make people want to be here.”

Ferris Wheel, an innovation space offering a variety of services to help businesses, innovators, and those with bright ideas looking for a place to shine, has been doing just that since November 2017. With 70 spaces available spanning seven floors, the Ferris Wheel is currently at 92% occupancy. Such enclaves for supporting ingenuity and entrepreneurial spirit are on the rise around the country, but the Ferris Wheel goes beyond just being a typical business incubator. They want to attract creativity from more than just startups by creating an environment in which community feels welcome. Kale says she thinks of it as a “small little chamber of commerce,” but with a more approachable feel.

When you walk into the Ferris Wheel, you are greeted by Fosters Coffee Shop on the left and Flint Prints on the right. Both businesses are front and center offering immediate products and services to those walking in, thus attracting foot traffic and curiosity. “The first floor operates as the storefront to innovation, and is very intentionally inviting. [Patrons are] naturally interested in the space and what’s going on.” This curiousity provides the staff of the Ferris Wheel with opportunities to provide information about what is available.

And what’s available is something for just about anyone with an idea. “We’re membership-based, offering amenities to each level of membership. It’s about building community and connecting folks to resources within the space,” says Kale. Those levels include everything from long-term office suites and services down to student-based services with prices ranging from $25 to $699 per month for the top-tier membership. Members receive credits for furniture, office space and free Wi-Fi.

Adding another layer of flexibility to this monthly membership system is that members are not locked into leases. Kale says the idea is to help businesses grow into themselves by providing space for that growth, while understanding the perils of business might also necessitate scaling back at times. “If we can’t manage that within the space, then we provide them a soft hand-out outside our building community.”

Sometimes the resources members need can be found right inside the Ferris Wheel, hence the importance Kale and her staff place on special events like the one I attended. These events bring members and non-members alike together in a space built to let conversation lead to innovation.

“It’s about building those connections, whether it be coffee up front, or our mixers to bring everyone together. Someone on the 7th floor might need a service provided by someone on the 4th floor,” says Kale.

Likewise, it works to encourage those from the outside to bring their ideas inside. Listening to those ideas is probably the key difference the Ferris Wheel has over similar business incubator models. Kale and her group looked at what was working in other cities around the country and what would make sense in Flint. Rather than starting out with a core set of values, the Ferris Wheel started work with partners immediately and forwent setting those values until they had a better understanding of what they were doing, how it was working and what could be built upon.

This idea of ‘intentionally being unintentional,’ as Kale calls it, even went into the design of their spaces. Brick walls and studs were left exposed to let members decide how it would look. “You don’t need to prescribe something,” she says. “It can’t be [our] vision, it has to be a collective. So we’ve built it as we go.”

A different model from the more traditional strategic plan, Kale says it’s her and her staff’s job is to listen to the community’s needs and see how best to fit them.

“It’s very customer service-based. A lot of times start-ups don’t know exactly what they need when they walk in the door,” she says. And if one of her staff isn’t able to help them with their issue, they don’t send them off blindly to the next person. Instead they make the call to determine whether or not there’s a solution on the other end. “We want a warm hand-off. There are already so many barriers [to starting your own business] that we want to help alleviate those problems.”

That helping hand approach is central to one of the Ferris Wheel’s larger and more permanent residents, the nonprofit group 100k Ideas. Their motto—relieving the innovator of the entrepreneurial burden—puts them in sync with Kale and her team’s goals. She points out that prospective business owners have so much worry upfront about the myriad hurdles they haven’t fully considered that they often don’t know where to start. From financing to business model creation to whether or not the idea has already been done, workers sit down to help customers through an intake phase to vet their ideas for viability. This is done through financial and market analysis, and looking at the next steps to be taken, saving customers’ time and money during that crucial first phase. It also helps prevent those whose ideas aren’t viable from making costly investments. This common sense, realistic approach makes sense in a city like Flint where, like in so many other cities, businesses can and have died before they even get off the ground.

For Kale, a life-long Flint resident who has seen her hometown go through many ups and down, one of the most important values that works for Ferris Wheel is being flexible and allowing the community to help build the space. Her goal is to see Flint’s active downtown become a hub where the entire community feels welcome and has a say in how it is used, all without telling the community what that should be. “If we prescribe it, it’s not authentic. It’s not made by the members, the community, by the customers.”

This inclusive attitude can be seen in Kale’s approach to managing her own staff. “One of my favorite mantras from a leadership coach is ‘offer what you can and ask for what you need.’ That’s a mantra I spread around Flint,” she says. “The team is the team. In order for something to function at a high level, everyone has to be a team player. I can’t ask my staff to do something I can’t do myself. My job [as manager] is to prepare them for the next step. Just as we want the businesses to grow, I want my staff to grow. After all, they’re not going to be here forever.”

It is Kale’s hope that Flint uses the Ferris Wheel and the rest of downtown as a place of their own. “From my perspective, downtown is becoming more attentive to the needs of folks in the community, not just the downtown residents and visitors. Don’t create things downtown for people, go out and find out what they want and how they can feel connected. This is our downtown. I believe Ferris Wheel emulates what it should be as the hub of our area,” says Kale.

This brings us back to Kady Yellow becoming the director of placemaking in Flint, a role tasked with finding ways to make Downtown Flint inviting to everyone. And to do that, Kale says her group needs to go into the neighborhoods, into the churches and other community hubs and start listening. “If there aren’t any conversations happening, then we aren’t to know where opportunities and new partnerships are going to surface.”

As we near the end of our conversation together, sitting in the common area of the Ferris Wheel, there is a buzz of activity as members and guests prepare for a small announcement ceremony pertaining to Flint’s minor league soccer team The Bucks. Pizza, sandwiches and other refreshments are being laid out for any and all who happen upon this occasion. Given the foot traffic around the two shops up front, that is no small number. I grabbed a slice on my way out and am struck by how this small event epitomizes everything Kale and I talked about. Inclusiveness, openness, making a space for the community, giving them ownership—this is the true export of Ferris Wheel. This is the difference that sets Kale and her group’s model apart from others.

This isn’t just a business incubation center or an office space to rent. This is meant to be a shared part of the community. This is the grand marquee fixture where anyone with the light bulb of an idea can plug in and shine. And the more this marquee shines, the brighter the community’s future looks.

Can You Know Your Own Research Paper Topics?

Safety Third: Living in a Third World Country During a Global Pandemic