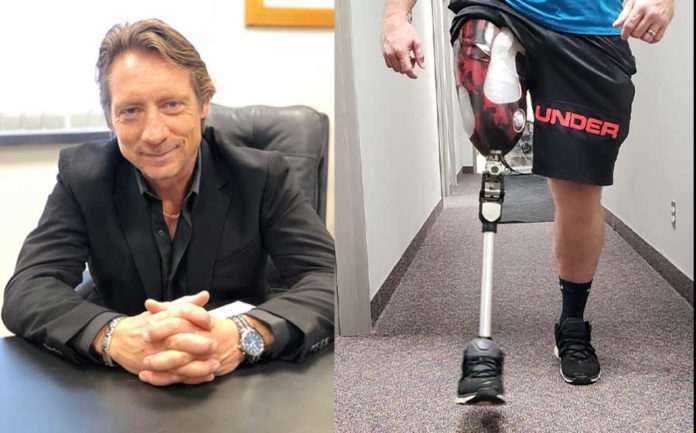 “You don’t have a leg to stand on.” We have all heard that expression – implying hopelessness, the odds stacked against you. For some people, it is not irony, but a rough life challenge, physical truth as well as emotional crisis. The same is true for amputees in all situations. A Michigan man, however, is turning that metaphor on its head.

Mike Bugg is that man, seemingly more than one man who is bringing hope, health and happiness to amputees. He is an innovator, a service-minded charity-giver, a designer and builder of orthotics, a teacher, a pediatric specialist, the recipient of awards in his field. As the owner of Orthotech Prosthetics & Orthotics with four locations in the state (at the moment), his other titles are Nice Guy, and Mike Who Goes the Extra Mile. Formally, his titles and licenses read Orthotist, Prosthetist, and Certified Pedorthotist (one of three in the state, specializing in children’s challenges). Mike is involved in the fabrication of pro-active equipment, too, making face masks for the Detroit Pistons and knee braces for the Detroit Lions. Unless you have lost a limb in battle or an accident or from birth or other cause, you might find it impossible to understand the problems facing the necessity of needing orthotics – a prosthetic leg or arm. It is not a matter of “merely” getting used to balance, or inconveniences.

Mike lists some of the many challenges that his patients face, and how he is mindful that every one of them is different in myriads ways. “In fact, many people are different through the years–as kids grow up, adults age and bodies change.” Chafing, sores, ulcers, factors with height and weight, lifestyles, changing activities… all factor into the fine-tuning of proper approaches and individual needs.

As much as anyone not needing orthotics can empathize, Mike Bugg knows his patients. His grandfather was a military veteran and an amputee, and his father worked for a prosthetic company, ultimately rising to management of a large operation. Mike worked there, too, also advancing from routine duties to management. But then he struck out on his own in 1999…and he made Orthotech Prosthetics & Orthotics his own company, no doubt, with his own visions and standards.

Born in Michigan, his first desire was to serve the needs in his community. From one office, he has expanded to four, and is not against the idea of growing beyond the state.

Although he personally designs and fabricates the prosthetics – winning unsolicited praises from his patients – his first goal in every case is service. He has had patients come from as far away as California; and one patient who endured an ill-fitting leg from another supplier for seven years had his need met in a day. “You gave me my life back!” the man said.

That man’s story is not unique, but typical at Orthotech Prosthetics & Orthotics. Mike remembers that the man showed up at the office on a Thursday. “I took measurements and he answered all questions,” Mike remembers, “and he walked out at 5:00 the next day. He told me he was so comfortable that he went shopping at Walmart that weekend!”

His approaches and innovations, and putting the latest technologies to work, parallel Mike’s commitment to service, and illustrate his modesty and his “heart.” He sometimes starts his day at 5 a.m. and often goes home at 10 at night. Mike does not brag – he keeps asking the interviewer to discuss individual patients and unique problems that were overcome instead – but it is not out of place to relate what staffers and patients have said about Orthotech Prosthetics & Orthotics.

You will not find these stories all over his website, but the remarkable Mike Bugg seems like a one-man Shriner’s or St Jude’s Hospital, to cite two examples most people know about care-giving. He often travels to patients’ homes if they cannot make it to one of the offices. (House calls in 2018?) He has been known to creatively help patients with extreme needs and in extreme distress, perhaps financial distress. In a business where insurance companies are confronted with bills for “re-dos,” perhaps after years (and which seldom are covered), or when patients often face new rounds of fittings… Mike has been known to absorb the work and costs.

There are suppliers who provide prosthetics as if “one size fits all,” but never Mike Bugg. Every patient can expect a consultation and a fitting. Mike and his staff do anything and everything to make even minor problems right. “After all the attention we provide,” Mike explains, “I want the patient to actually feel like they have had a role in building that leg. Because they do!”

There have been times that someone visits an office of Orthotech Prosthetics & Orthotics at 3 p.m. “At 10 the next morning,” Mike says, “they might have three legs waiting for them, and they have a one-month trial to be as ‘right’ as possible!”

Service and superb craftsmanship. Up-to-date facilities and a staff with a family ethos. Mike is no less proud of two other aspects of the work he does: “I feel like I am in the business of encouragement and education.” Patients might limp in and walk out; but they never just walk out. At Orthotech Prosthetics & Orthotics every patient will understand everything about their new prosthesis. “If they aspire to run in a race, or be a top finisher in the Baja 500 Motorcycle competition [which one of his patients accomplished] I help them go for it!”

“I can enable people to have better lives. I love serving vets, too. To know I can put a smile on somebody’s face… that’s what it’s all about!”

What motivates a man like Mike Bugg? He prays every day (“You’ve gotta have faith!”) and is one of those people who simply radiates compassion. It easy to say that he draws inspiration from the smiles and compliments. But many of his patients had been to many other places and had instances of dissatisfaction. “Anyone seeking prosthetic legs can obtain basis prosthetics somewhere, but we offer completely customized designs that fit you perfectly. For me to know that, is what keeps me going.”

Not an empty boast – not even a boast, really, when Mike Bugg says it. It is a way of life for him, and the way of doing business, serving people, at Orthotech Prosthetics & Orthotics.

“Kyyba: Health & Life” is inspired to work with amazing partners who change lives of incredible people around them, like Mike Bugg of Orthotech Prosthetics & Orthotics. In an upcoming issue, we will focus more on this remarkable place…or four places, and growing. We are grateful to catch him when we can! When he is not busy meeting with patients, fabricating prosthetics, or visiting patients, he can be found lecturing on traveling with prosthetics, cerebral palsy, serial casting, foot plating, or other matters. Or bringing along another generation, his son Mike. Or tending to his only hobby, raising beef cattle.

But you’ll find him – and Orthotech Prosthetics & Orthotics – in an upcoming issue of “Kyyba: Health & Life,” spotlighting some of the actual stories from actual patients, young and old. Prepare to be even more inspired.