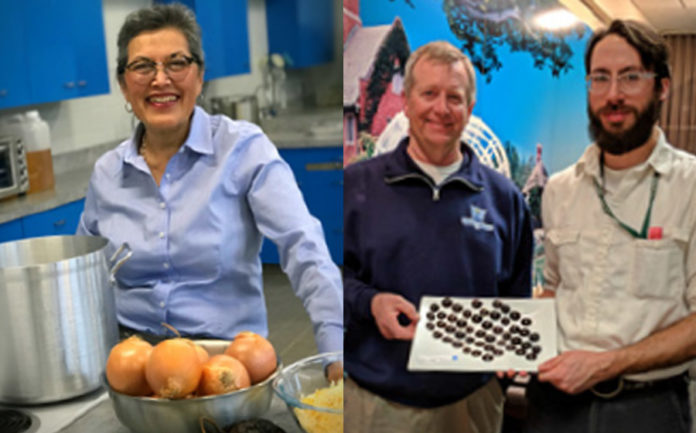 This is a story about community, dreams and… sauce?

Hilda McShane, Bay City native, moved to Flint in 1982. She has worked with nonprofits for many years and was looking for a way to give back to the community when she was laid off from her position as a marketing specialist at the Genesee County Health Department last September. Getting laid off would squelch many people’s altruistic dreams of helping others, but McShane took it as a sign that it was time to do something different.

It had always been her dream to do something special with her family’s enchilada sauce recipe, and perhaps getting laid off was the perfect time to make that dream a reality.

McShane’s parents were migrant workers from Texas, and she grew up eating traditional, home-cooked Mexican food. They had a strong sense of community as do many migrant families, and McShane says for as long as she can remember, her family was always fundraising for a good cause. Her mother was a founding member of Our Lady of Guadalupe in Bay City, and she believed good food and community went hand-in-hand.

Not one to sit around for long, she approached Joan Clarke, Director of Development at Catholic Charities in Flint with a unique idea—that would not only provide a fundraising opportunity but a platform from which to test her sauce with the public. Her idea was to sell cheese enchiladas smothered in her delicious sauce, with a side of homemade beans and rice, every Friday during Lent.

If you are getting hungry, you might have missed out, because McShane’s sauce, “Holy Moley” is divine! Although she intended for all proceeds to go to Catholic Charities, the project is more than just a fundraiser. She created surveys and did sampling sessions to use the fundraiser as a testing ground for creating a Catholic Charities’ Holy Moley signature enchilada sauce.

“I believe that nonprofits should be self-sustaining,” says McShane. “So why stop at a fundraiser? My dream is to turn my sauce into a viable product in which a portion of the sales goes back to Catholic Charities, similar to how the Newman’s Own Foundation sells salad dressings.”

But the potential for this project didn’t stop there. As with most good ideas, once they are out of the proverbial gate, they tend to take on lives of their own. To make the fundraiser happen, McShane had to find a reliable source of chili anchoes (dried poblano peppers, the key ingredient in her sauce), and discovered that there is not one in Michigan. She approached Ben Phillips from the MSU Cooperative Extension in Lapeer to get confirmation that Michigan indeed does not produce chili anchoes.

Phillips immediately saw the potential for the project and contacted John Leaman of Green Applebarn in Freeland. Leaman had recently purchased a commercial dehydrator and was looking for new products to dry. After doing some experimental dehydrating, Leaman provided samples of the chili anchoes to Chefs Mark Handy and Matthew Cooper of Mott Community College’s culinary department.

Handy and Cooper hosted the American Culinary Federation’s Annual Awards Banquet on Feb. 19 where at least 30 Tri-County chefs participated in a taste test of the ancho chilies! The chilies are now in the final stages of testing at two local restaurants to ascertain the commercial viability of creating this new Michigan product.

By January, McShane was knee-deep in chili anchoes and the community was rallying to be part of the project. Judge Geoffrey Nethercut from Genesee Counties 7th Judicial Circuit Court and his team, all members of the Genesee County Bar Association, spent a Saturday processing the chilies, the key ingredient in making a traditional Mexican enchilada sauce.

The dried poblano peppers have a concentrated flavor, and the drying process slightly sweetens the pepper. The dried poblanos (chili anchoes) are then cleaned and the seeds and stems are removed. The chili anchoes are then rehydrated and milled into a puree, creating the base for the sauce. “It was so great to have Judge Nethercut and his team! They cleaned and processed more peppers in a few hours than I could have done myself in a week!” says McShane.

Even a group of seniors from Powers High School got in on the action! As part of their senior year “Capstone Project,” students are given an opportunity to put the Catholic Social Teaching Principles into real-world action. The focus of the Capstone Project is to remind students that every person is precious, that people are more important than things, and that the measure of every institution is whether it threatens or enhances the life and dignity of the human person. It also emphasizes that we are one human family whatever our national, racial, ethnic, economic and ideological differences. Loving our neighbor has global dimensions in a shrinking world and our love for all people demands that we promote peace in a world surrounded by violence and conflict.

The Powers group was required to do volunteer hours within the community and, when they heard about Holy Moley, they jumped at the opportunity to participate. When asked why they chose this project over those of several other local charities, they said that it was because of the diversity of services offered at Catholic Charities. They loved the idea of getting in the kitchen to make sauce, and that the proceeds are used to help the most disadvantaged people in Flint.

Grainne Caughey is Vice President for the National Honors Society at Powers High School. She wants to be a pediatrician, but also dreams of taking trips to South America or other disadvantaged parts of the world to offer help. “It breaks my heart to see and hear about kids who don’t even have shoes on their feet, much less all of the other things that we take for granted here,” said Caughey.

Her classmate Alise Haddad agreed and was also very passionate about the project. “I was very excited about Holy Moley because it is a great way to get us involved in the community. I did some volunteering last summer and realized that that’s what life is—helping people. I get my happiness from seeing the smile on people’s faces.”

Young people can bring a lot of hope to situations because they haven’t been hardened by life, and while they might not be as wise as their elders, they have something to say. When they are given an opportunity to see how much they take for granted and how lucky they are, they can really make a difference to society.

At the conclusion of the fundraiser, McShane considered it a complete success. People loved the sauce; it raised additional funds for Catholic Charities, and her dream of creating a sauce born out of compassion is well underway. But she has more than a secret recipe that she holds close to her heart. She has learned one of the secrets of life: when we use our God-given talents to do good in the world, amazing things can happen. “In a recent homily, my parish priest, Father Anthony from St. Pius X Church, reminded me of the parable Matthew 25: 14-30. It is one of my favorite parables because it is a constant reminder to me that my blessings need to be used for a greater purpose,” says McShane about the Parable of the Talents. “Well done, good and faithful servant,” is the Master’s reward.

What started as an idea for a fundraiser to help the people of Flint has become much, much more. McShane, creating an enchilada sauce and a new poblano pepper product, will eventually bring two new industries, and human compassion activity, to the Mid-Michigan area!

Giving Voice to the Voiceless