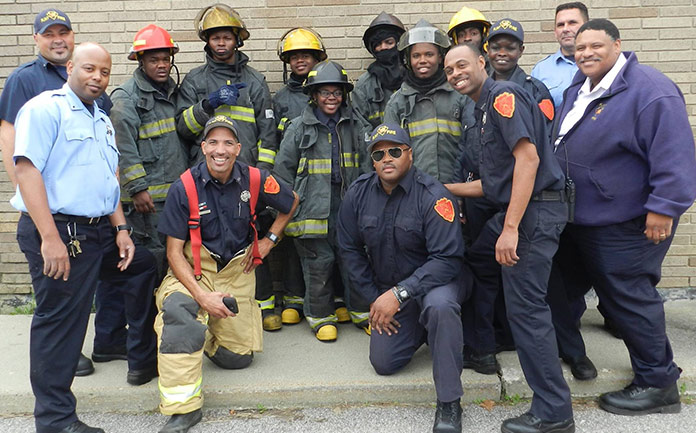 It’s a beautiful Sunny Tuesday in March when I arrive at the Flint Farmers Market, the kind of day that feels full of hope and optimism. That feeling is boosted for me because of the reason for my visit. I’m here to interview one of our community’s truest heroes: Rico Phillips.

A Flint Fire Department captain recently retired after over two decades of serving his community, Rico’s star has continued to rise as the founder of Flint Inner City Hockey. The program began in 2010, and has made possible a sport unattainable to kids in economically disadvantaged circumstances. And his work has not gone unnoticed. In June 2019, Rico was presented the NHL’s Willie O’Ree Community Hero Award, named in honor of the first African-American NHL player, at a televised ceremony in Las Vegas. Since then, he has been a guest of honor at professional and semi-pro hockey events around North America. He has been interviewed numerous times by local and national sports media about the program, the award, and what all of it means to him. All of these thoughts swirls in my head as I sit there anxiously awaiting his arrival. I know going in that this will definitely be an interesting interview, but I wonder how I’m going to make ours stand out. I don’t have to wonder long. As he greets me and sits down to talk, I have no idea I’m about to be treated to the most fulfilling conversation of my week.

As I spot the tall, slender man with a glowing smile, I rise to greet him. Rico and I have known each other a long time through our various roles in Flint, so I feel at ease immediately. The look in his eyes tells me this is a man elated, riding the kind of wave that comes from a life’s work being recognized and appreciated. As well it should. That life didn’t come easy.

Rico grew up in Flint, the youngest of four siblings in a home where his parents struggled with alcohol and drug addiction that led to a bitter separation. Instead of letting this define him, Rico looked to find a healthy outlet outside of his home. “I don’t talk much about that because who does? But I emerged and had to stand up and fight through that and define who Rico was,” he says. “Rico is this guy who cares about people around him and wants to make them feel better.”

This attitude of looking out for others’ well-being was a perfect trait when at 10 years old he found what would be his future with Flint’s Junior Fire Department program. As Rico explains, the program involved Flint firefighters coming into the schools to talk about fire prevention and home safety tips to students. “Basically, it was so we would go home and be these little fire marshals looking for home safety hazards. And if you got the lesson well and turned in the hazards you found each week, you would take a little test that if you passed, you were promoted,” he remembers. Not surprisingly, Rico says he was promoted every week until he became the Flint Junior Fire Department’s Fire Marshal.

“At a young age, I knew I wanted to be a fireman. So I would wear this badge as a 5th grader. Later on, I would look at it and know that one day I was going to be a firefighter.” Years later, when Rico finally fulfilled a life-long goal and got his real badge, it came with mixed feelings. “On one hand, I became who I wanted to be, but I knew if I ever strayed from that I was always ‘Firefighter Phillips.’” That kind of commitment, to attach your role so intrinsically with one’s identity, can bring on a lot of emotional stress—especially in a field with no shortage of stressful, heartbreaking days.

In a firefighter’s career, they will undoubtedly see many traumatic scenes the rest of society would be lucky to never witness. These heroes we count on take in tragedy on a weekly basis. And while it may not be their own tragedy, in those few moments while they are trying to help, they feel it is. And that led to Post Traumatic Stress Disorder (PTSD). Rico relates that in his first week, he went to a call involving a burning home with occupants who did not make it out. The horrific scene of people being burned alive was unforgettable for him. “I almost left. My fellow firefighters told me it wouldn’t always be this bad, that was the worst it could ever be. I never saw anything else that bad through the rest of my career.”

Rico points out that it’s hard to cope with the grizzly scenes he and his colleagues carry with them. He tells me of the countless Sudden Infant Death Syndrome (SIDS) calls he responded to in which it was too late, leaving him and his team feeling helpless. “We get back to the station and we never talk about it. What are you going to say? ‘That was terrible.’ You just go back to the station and absorb it, knowing you were completely helpless today.” Or the days that he meets children in squalid living conditions. “I can’t do anything for their living situation and it bothers me,” he says. “I’m getting emotional just talking about it.” Honestly, just from seeing how he relived it in front of me, so was I.

This emotional stress builds over time, leading to problems outside of work that can affect one’s mental health and relationships. Rico says the very nature of his profession’s unique stress can impact who a person becomes; they are shaped by that trauma. Talking through this trauma is important, but finding understanding in even those closest can be daunting. “The divorce rate for first responders is very high,” he says.

“When we get married, we know the life we chose; but our spouses don’t necessarily know what they’re signing up for.” He says the general rule he and other first responders follow is to not let loved ones into that stress too much in order to keep it from becoming their own. Doing so creates an emotional distance that can become insurmountable. Rico is thankful that in his own case, the balance he found worked through his entire career—but others aren’t as lucky. For this reason, Rico says it’s important to talk to professional mental health providers in an unbiased atmosphere. “That’s the only way you’re going to get beyond that feeling. Because otherwise, you’re going to have other health problems.”

Firefighting is also one of the most physically demanding professions. On top of the heavy lifting, heat exposure, and need for quick reflexes, Rico says there are other stressors that might not be as obvious. Like the impact it has on one’s heart. “When you’re on call at the fire station, you’re there for 24 hours at a time. A lot of that time is spent at rest. Sure, there are other things to do, but eventually you have to rest.” He explains that when a call comes in during the middle of the night, a firefighter’s heart is at a resting rate. When that bell goes off, it can jump by as many as 100 beats per minute. Then, back at the station it is able to come down again. This cycle can repeat many times in a given shift, taking a huge toll on one’s cardiac health. Heart attacks are a real threat, one to which not even Rico was immune.

For Rico, it wasn’t the high risk of death that came from his work. It wasn’t worry over his or his brothers in uniforms’ mortality. He’d accepted that as part of the job. It was the realization that tragedy could hit so unexpectedly so close to home. Rico shares that after a colleague’s wife passed away suddenly from a heart attack, his thoughts turned to the health of his own wife Sandy. “It ruptured the way I thought. I was so scared to lose my wife. Usually, it was her worrying about me because of what I do.” The fear and anxiety he developed due to these unshakeable thoughts of loss, vulnerability and helplessness led him to a wakeup call with his own health. That week, after speaking at his friend’s wife’s funeral, Rico was fixated on those feelings. The next morning, on his way to meet friends for breakfast, Rico received that wakeup call.

“If anyone were to look at me and I tell them I had a heart attack, they’re in shock.” I certainly was, especially given this was within the last two years and we’d been in regular contact during that time. But that’s exactly what happened to Rico. The cumulative effect of those compounding physical and mental stressors led to the development of an angina which registered as a heart attack. He said he felt tired when he reached the restaurant, out of breath, like he just needed to lie down. Being a firefighter, wearing the cape if you will, Rico admits he wasn’t ready to admit something serious was happening until his colleagues insisted. Even as a first responder who had seen dozens of identical situations, he wasn’t ready to admit this was happening to him. Rico finally let his pride fall away, as he sat in the ambulance and listened as his fellow first responder told him the score.

In an instant, Firefighter Phillips realized just how important it is to keep your physical and mental health in balance—that the stresses we carry can damage us. To Rico, it’s a message he spreads with the same importance he’d always placed on fire safety. And just as when he talks about fire safety to kids, he wants us adults to recognize the hazards we all have in our daily lives and stay healthy. That’s one of the most endearing qualities about Rico. He can take on a challenge, overcome it, then turn around and share with the world they can overcome the same challenge. He feels compelled to.

In the second half of our interview, we talk about how hockey played an important part in shaping Rico’s social structure, his teamwork ethic and showing others how to overcome racial stigmas. Until then, stay safe.

A New Year and a New You! Top Trends in Health And Wellness For...