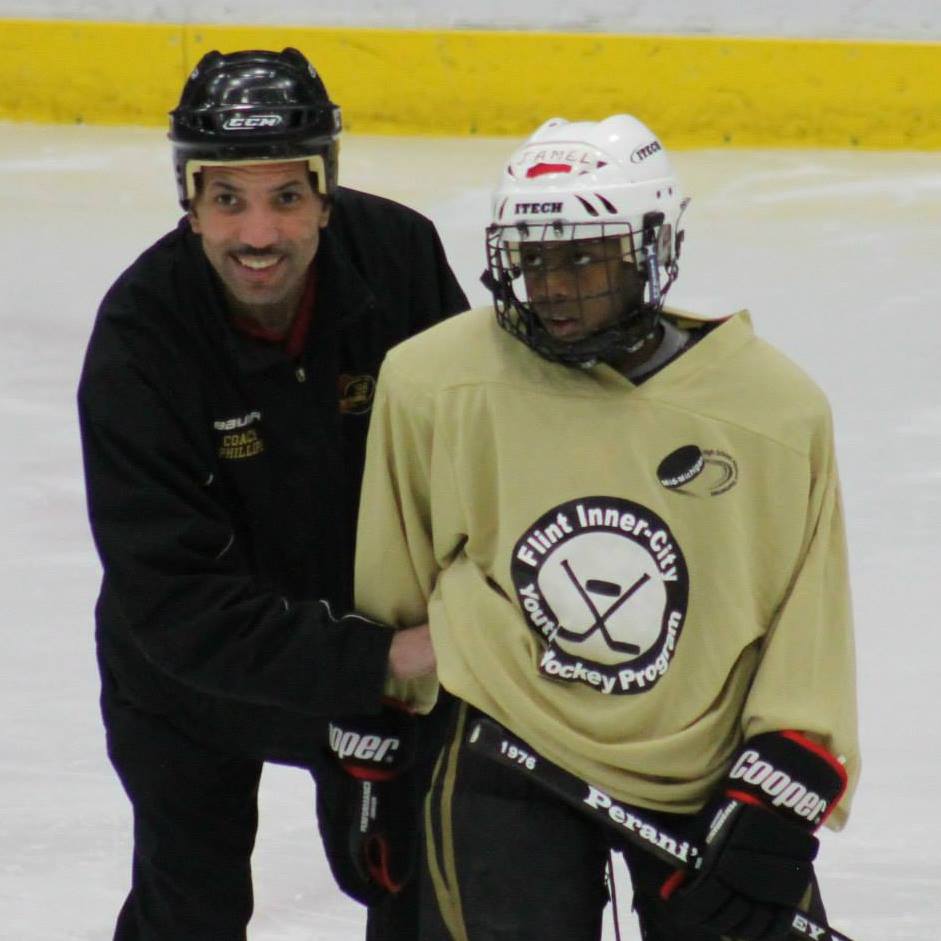 On the beautiful March day on which I conducted my interview with Rico Phillips, the world seemed bright—brighter than usual because of people like him. And while much has happened over the past couple of months to dim some of that brightness, Rico’s brilliance still stands. We talked for over two hours with much of the last half being just honest conversation about life and the need to find meaningful purpose in it. Rico is one of those rare individuals who has undoubtedly found his. In my last article, I highlighted his career as a Flint firefighter and the revelations he came to on the importance of maintaining physical and mental health. In this installment, Rico shares his other great passion and the spiritual healing he found in it. That passion is hockey. More specifically, how the sport has allowed him to reach out to others, especially young people, in a way that has a positive impact on their lives.

In light of the first installment of this interview, it is important to see the comparisons in Rico’s dual passions. He does everything at full throttle. Firefighting, for one, is physically demanding, requires a lot of heavy gear, and puts one into the way of potential injury. Those same things can be said about his chosen form of recreation, hockey. On the surface, it seems like a natural fit, right? Well for a kid from Flint, the sport is not as accessible as it is for those in affluent neighborhoods. This is true for Rico who never even considered hockey until well into high school. Rico says he was familiar with floor hockey and ice skating at local parks during the winter, but it didn’t appeal to him right away.

“I picked up hockey as a trainer. What I appreciated about the sport was the passion, speed and skill,” Rico says. “It’s very demanding and not just physically; you need a mental toughness to get back up after you fall a bunch of times.”

As an athletic trainer, Rico treated his fair share of injuries; but it wasn’t until Rico’s senior year of high school that he finally became a member of the hockey team at Flint Southwestern Academy. “I couldn’t even stop yet. I only learned how to skate about a year and a half before that.”

Fate seems to have played a role in Rico’s hockey career. There were 20 slots open on the hockey team; 19 kids and him showed up. “If there had been 20 kids, I probably wouldn’t have been picked. I got more ice time as a trainer than in that first year,” he says with a laugh. A moment he can laugh at now, but one that caused him much frustration at the time. “I was upset with the coach, but he didn’t know that,” Rico explains. “We would have games that would be a blow-out either way and I would wonder what harm could putting me on the ice for a bit cause?” He came to the realization later what was happening. “He was saving me from being injured.” Later that year, he became a referee. “I still couldn’t stop, but it gave me more time to learn the game and get better at skating.”

Being a student referee who couldn’t skate well certainly made Rico a target of some ridicule from players, but sadly it wasn’t his skill level that led to the worst of the comments. “At 17, I was getting called racial slurs.” Worst of all, at times they came from adult coaches. “I remember I was coaching a youth league game and one of the coaches thought I blew a call. He thought the best way to deal with me was by calling me the n-word and threatening me with physical violence.” A bit shaken by the incident, Rico questioned his future in hockey until a colleague helped harden his resolve. “He said if I quit than I’m doing exactly what (the offending coach) wants me to do. He said ‘there’s going to be bigots in this world and you’re going to have to deal with them as an adult. So you can either grow and deal or go the other way and just not do the things you enjoy, the things that give you purpose’.” That same colleague made sure the offending coach was suspended for his deplorable conduct, but also showed Rico the power he wielded.

“He said, ‘Rico, you had the authority to do that yourself.’ He knew I wasn’t going to do it, but he wanted me to realize that so I knew how to deal with that situation in the future. I grew up that day. It was a defining moment for me. Thirty-four years later, I still referee,” Rico says.

It was that moment Rico points back to when he realized he wanted to change some of the cultural perceptions of the sport he loves. “After years of being the only person of color on the ice, I decided that if I ever had a chance I’d make a difference.”

That chance came in 2010 in the form of the Flint Inner City Youth Hockey Program, which caters to kids ages 8-11. “I wanted kids in Flint to have a chance to play this great sport.” At the time of Rico’s first steps with the program, hockey was still inaccessible to many kids who lacked the finances to get into hockey (the equipment is quite expensive) as well as the view that it was a ‘white sport.’ As Rico mentioned before, kids in Flint had access to ice rinks at local parks when he was growing up. Those rinks shrunk into disuse during the city’s downturn through the 1980s and 1990s and have not returned, taking with them another chance for Flint’s youth to find healthy activities.

So in 2010, Rico founded the Flint Inner City Youths Hockey League which played out of the city’s only hockey arena, the Dort Federal Credit Union Event Center (formerly Perani Arena). The arena was already home to a local minor league hockey team that played games and practiced at the facility. This opened up the opportunity for Rico to use the facility for his program. The location of the arena being in Flint was important to Rico’s mission.

“I couldn’t start an inner city hockey league and play [in the surrounding townships]. How am I going to attract kids to a place they don’t even know about?” he says. Everyone in Flint knows ‘the Dort.’ It’s where the circus comes to town; it’s where graduations, car shows, concerts and other local events are held. And it’s one-of-a-kind in Flint. “To be honest, I worry about what would happen if the arena had to close, especially as it relates to the program,” Rico says. “This is our place.”

But location wasn’t the only thing Rico had to consider when forming the league. He also knew there was a cultural barrier that needed to be broken to make it seem approachable for inner city youths of color and their families, in addition to the cost. “I think in the African-American community, it’s more a fear of the unknown; it’s a ‘white person’s sport,’ so they’re not as willing to give it a try. So a person like me, a person of color, has to come into the community and be almost the pied piper of it and say ‘this is something your child should try at least once.'” Rico says the benefits of the program go beyond learning a new sport or learning to ice skate; there are important life lessons to be learned along the way as well.

That’s why Rico says he pitches the program to parents as an overall experience in which every player is given time to shine in their own way. The inevitable result is that some of those players will excel and want to continue playing. “What we check for is to make sure they have that parental support that it takes to go on in the sport.” That support not only includes the costs, but also the time to make sure kids can get to practices and games without being too stressful.

“If a parent is working three jobs and can’t get their kid to practice or a game, let alone watch it, then it sets them up for failure. I try to set them up for success in the sport, which is not easy. I don’t want to make a decision solely on a kid’s socio-economic situation, but I’ve got to be real,” Rico says. For the kids who show a real aptitude and drive to continue in the sport, Rico finds a way to keep them going by getting them into more advanced levels of competition, as long as the their families can shoulder the burden.

All of Rico’s work didn’t go unnoticed. In 2019, he was awarded the Willie O’Ree Community Hero Award which, by definition, is given to an individual who “through the game of hockey, has positively impacted his or her community, culture or society.” It was through a concerted effort from those who know him and the Flint community in general that led to a landslide online voting victory. There is no doubt in my mind that when the poll to vote for this was shared, there were those who voted for him simply because he was Firefighter Phillips to them. Or others who saw him as friend or mentor in some other capacity. No less a hero, just in a different context, but for the same reasons.

For Rico, a man drawn to both fire and ice, being recognized for both of his passions is more than he could ever dream of. He simply followed those passions and made them his reality. In doing so, he realized that he could give the rising youth in his community something better than fire safety instruction or hockey skills. He could give them inspiration. He could give them hope.

The word hero has been used lately to describe many of the people who make our lives possible and, no can doubt, they certainly are. We owe a debt to all of those we have deemed ‘essential.’ But rarely does an individual rise to the level where both their career and their joie de vivre intersect in such a way that almost no facet of their life doesn’t positively impact those around them.

As I’ve said before, I’m from Flint and have met and known a great many of my fellow Flintoids. Rico’s name is not just one that is brought up as ‘someone’ everyone knows. No. Many people I know in this town can remember conversations they’ve had with him, things he has taught them, and the way he inspired and influenced them.

As the popular video game Halo once wrote of its main character: “A hero need not speak. When he is gone, the world will speak for him.” Rico, in a prime few men his age can reasonably expect to enjoy, does not appear to be going anywhere soon. But whenever he decides to leave his hometown, his name will echo on in the generations he has motivated. And Flint will speak for him.

It Only Takes Three! Sleep Healthy with Michigan Head and Neck Institute

The Faces of Opioid Addiction