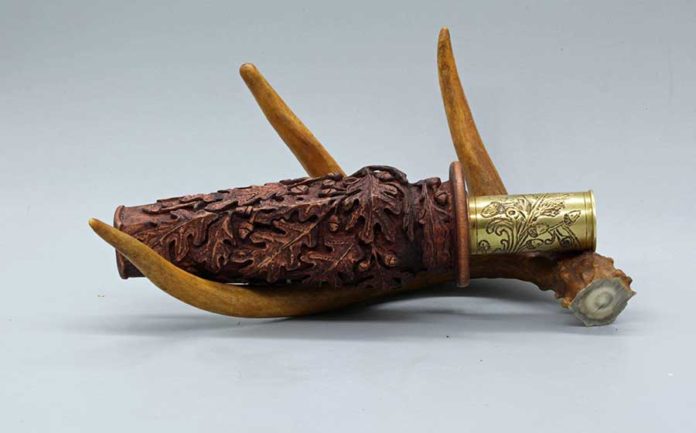 Rick Kagerer began his call-making career by chance after meeting Art Beauchamp’s daughter, Sally, in 1976. Rick and Sally married in 1979 and Art put Rick to work at Art Beauchamp’s Sporting Goods and Hardware. At that time, Art owned two locations, one on Pierson Road and one on Fenton Road. Sally managed the hardware store and Rick was at the sporting goods store.

Art was a world champion duck caller when he established the Art Beauchamp Game Calling Company in 1956 and began distributing his custom made game calls to Montgomery Ward and Sears. He worked hard teaching Rick to call at a competitive level. Rick hoped to turn out a champion caller to follow in Art’s footsteps. In 1981, Art passed away due to heart failure. This could have easily ended the call business. However, Rick decided to take over the business, keeping the shape of the call and the name of the business the same.

That was the start of the second generation of Beauchamp Calls, distinguished by Rick’s oval label. Rick made the Art Beauchamp style call while he was educating himself on the ins and outs of the call-making business. Rick stayed in calling competitions until about 1981, when he turned his attention to teaching calling lessons and building fancy versions of Art’s classic shape.

In 1985, Rick developed the Pro Magnum call and introduced it to the market. In 1987, the CCAA (The Call Makers and Collectors Association of America) was formed at Pointe Mouillee State Game Area, a 4,040-acre state game area consisting of coastal wetlands in Lake Erie near the mouth of the Huron River. Rick is a founding member, was an officer for many years, and was instrumental in starting the Association’s Fancy Call Contest. Later that year, he struck a deal with Ducks Unlimited to market and sell calls for raffles and to auction matched sets of duck and goose calls.

Rick still works daily on his line of fancy calls. He is also a craftsman at metalsmithing, mold-making, casting, plating woodworking and all phases of carving.

Rick’s calls can be found in many call-making and collecting books, and are a part of collections worldwide.

Why Does Chase Charge So Much for a Wire Transfer?

Rescuing Victims Of Abuse From Being Victimized A Second Time