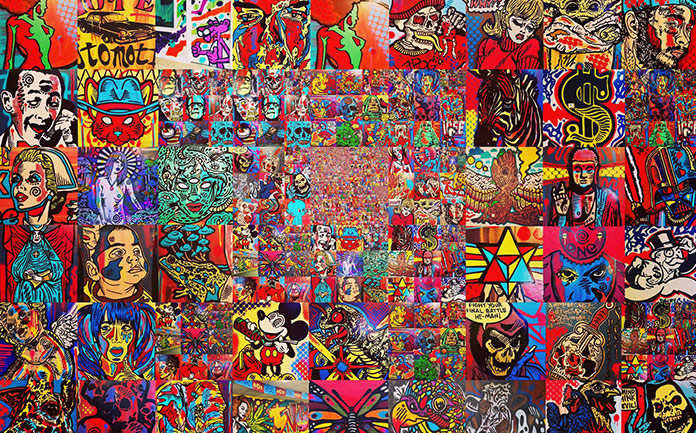 Artist Pauly M. Everett describes his art as “a big mash-up” of contemporary, pop and street art, painted onto wooden panels, stop signs, walls or other surfaces with bright, primary colors. If you’re into the art scene in Flint or Detroit, you’ll recognize immediately the energy and synergy of Everett’s signature style city psychedelic art, which you’ll find “larger than life” on murals throughout the city or in gallery exhibits.

At age 31, Everett has been making a living with his art since he was 19 years old. Growing up with a chaotic family life and having no interest in school beyond art classes, Everett left high school without graduating, but still keeps in touch with his former art teachers at Swartz Creek High School. “They give me an A+,” he said with a smile. He recalls working on his own art in elementary school, but not taking it seriously until he got to middle school. It was in high school that he developed his own style, dabbling in abstract and psychedelic art.

Although Everett never finished high school or attended college, he has a huge heart for education and kids. “Last October, I did a solo exhibit at Mott [Community College] and spoke to students about art life.” He also works with kids at Flint schools, and is an integral part of the Greater Flint Arts Council.

Everett offers many of his community endeavors for free as a way to give back to the city he loves so much. He’s a regular at Churchill’s Food and Spirits, coordinating their participation in the Flint Art Walk downtown on the second Friday of every month. Much of his non-painting time is spent promoting the arts and music and planning events –from Flint’s Drop Fest and Buckham Alley Fest to the Free City Mural Fest, sponsored by Flint Public Art Project. “I try to help people out in Flint,” he said.

But you’ll find Everett most at home in the city of Flint, where his home studio reflects the influences of his passion for art, music and family. He’s a self-described “night owl,” often painting late into the wee hours, then waking up at noon, or later. Whatever he is doing, he plays music from the time he gets up until he goes to bed. His passion for the arts keeps him up at night, and that’s just the way he likes it. In the afternoon, you’ll find him at home taking care of his “main dude, his dog Petey, and doing other errands or projects until it’s time to start painting again.

“I like starting a project and finishing it in the same session,” said Everett. I like my lifestyle; I definitely wouldn’t be happy doing anything else.”

He’s close to his family, which includes two older brothers, two younger brothers, three nephews, a niece and two grandmothers who live nearby. His mom lives in northern Michigan in a small town called Greenbush and his father still lives in Flint. Everett grows quiet when he mentions that his younger brother, Philip, died several years ago at the age of 24.

Music is as important to him as his art. He’s active in the underground music scene in Flint and Detroit, mostly hip-hop, and devotes Fridays and Saturdays to going to concerts and shows with other artists and musicians. He has designed album covers, “mostly underground stuff,” he said. “My whole life revolves around art and music. Weekends are for taking a break from art.”

Everett admits that art is not only how he makes a living; it’s also his life.  He recognizes from his own experience that art can change lives, especially for people who suffer from anxiety or depression. “Creating art is how I keep my head screwed on top,” he said. “It can make folks happy.”

Give The Body A Holistic Experience At Primary Prevention Physiotherapy