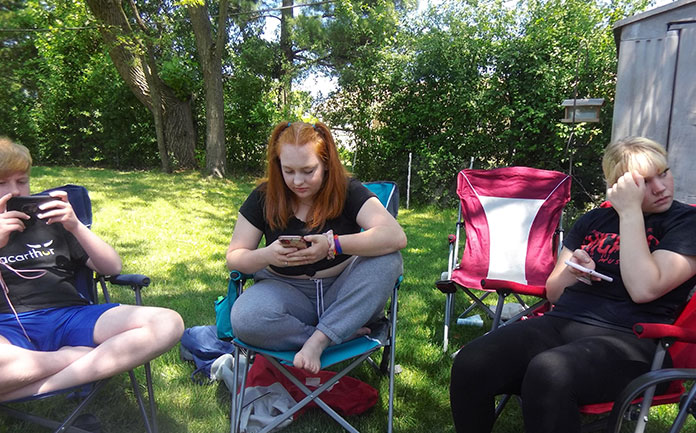 “The whole idea that kids should have only two hours of screen time, it’s just not gonna happen,” said Tara Corwine, a mother of three who works in a high school.

“They’re not going outside and it was difficult to find things for them to do in their age range. We’re not really a TV-watching family,” said Corwine, whose kids are 11, 14 and 18.

When the quarantine began and all three of her kids were home from school, the Corwines all played board games. “That was good when we were in shock. But it all went by the wayside,” Corwine said. “To be totally honest, it’s all changed.”

“What else do we have to do?” asked Maya Corwine, who will be entering high school in the fall. “My phone, that’s basically the only thing I’m on. I have an iPad for high school and I watch YouTube on it. I got a screen time report and it said 13 hours a day. I knew it was a lot.”

“There are timers on my Xbox but I sit there for hours on end,” said Rylan Corwine, who will enter sixth grade in the fall. “It’s kind of an escape.”

When schools mandated e-learning, kids’ screen usage shot up exponentially out of necessity.

Is that good or bad? That all depends.

“E-learning has been not great for a lot of kids, but if you set limits and realize its power, it can be great,” said Devorah Heitner, founder of Raising Digital Natives and author of “Screenwise: Helping Kids Thrive (and Survive) in Their Digital World.”

“How many kids have been called on for tech support?” she asked. “They have walked their grandparents and parents through Zoom calls. And the positive side is kids keep coming up with ways to stay connected.”

Heitner acknowledged that parents worry about their kids’ screen time. “But screen time can take on more different roles. It can facilitate relationships with friends and family members, cousins, grandparents. Or learning to make a cake or slime. Or it can be a distraction like watching a funny movie. Or strengthen competitive instincts by gaming.”

If technology is playing a positive role in kids’ lives, if they’re getting other things done, then, Heitner asks, what else can they do in quarantine?

“Parents feel bad about using technology, but how are they using it? Is it playing a positive role?” she asked.

There are alternatives to technology during quarantine, Heitner said. “Learning life skills, like how to do laundry or make dinner or wash dishes, can be taught. Let’s give our kids a chance.”

More important is that families work together on setting screen limits.

“It’s not just the parent setting the rules, but helping kids set their own boundaries,” Heitner said. “There are tips to teach kids how to track their screen time. The idea is not to make kids feel bad, but to see that all parents are doing this, that they need to track their own time. It’s fun for parents to see this, too. Rather than self-flagellate, recognize that technology can tether you to friends.”

Does technology affect mental health? The truth is, it can lead to obsession and depression.

“Our brain is not meant to be in front of a screen for eight hours. It can lead to increased depression rates. E-learning is necessary, but we need to balance that time. We are nomadic, we are built to do activities,” said Heather Monroe, a licensed clinical social worker and director of program development at Newport Academy, a nationwide teen mental health rehab center.

Monroe said it’s important for parents and teens alike to set boundaries on screen usage. “Parents need to mirror a boundary. They need to check themselves and their own screen use. If you say no screens at the table or set family time or screen time, then stick to that. Be the change you want to see in your child. Make it a family issue, not a teen issue. Tell them, ‘I need help on how to connect with you and your life.”

She said that kids are always watching what their parents do because “we’re the most influential figures in their lives, even if they say we’re not.”

That leads to the question of social media and mental health. “Ninety-five percent of teens have access to a smartphone. They’re more focused on reality online, not experiencing it themselves, not living or experiencing that reality,” Monroe said.

And during a quarantine when everyone is stuck at home, teens are online and on social media a lot more.

Corwine, a Chicago-area mother, said her kids don’t want to go on walks or go outside and play basketball as she might have when she was young.

She said her oldest, Grace, hardly texted her boyfriend before when they were at school together all day. “But now texting has increased to a lot of FaceTime and texting. We’re coexisting in the house. We’ll try and work through the addiction later. They’ve always been in the era of digital and instant gratification.”

Cancer is a Word–Not a Sentence

The Human Barometer Of The Real Estate And Mortgage Markets